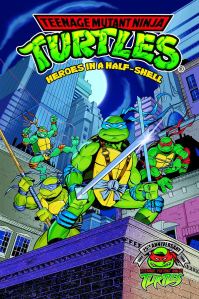 While many children of the 80’s may fondly remember the Thundercats, be there one among us that can honestly say they were not a victim of Turtlemania?  The Teenage Mutant Ninja Turtles were THE cartoon and toy jugernaut of my youth.  I loved Thundercats, I loved Silverhawks, I loved Transformers, and I really loved G.I. JOE, but they all paled in comparison to the force that was TMNT.  Now that I’ve grown in years, if apparently not in maturity or wisdom, I still have a soft spot for my hard-shelled heroes.  I even tracked down some of the DVDs a while back, and found that the old ‘toon had held up remarkably well (a good sight better than Silverhawks or G.I. JOE).

In addition to watching the show, I used to read the comics as a kid, but as any real fan of the Turtles knows, there were actually two different books going at the same time, the “real” Turtles as intended and sustained by their creators Kevin Eastman and Peter Laird, and the lighter Teenage Mutant Turtles Adventures, which took it’s tune from the show.  As a kid, I was of course completely addicted to the the Adventures book.  I was very surprised to discover this a few years ago, but have since tracked both books down and thoroughly enjoyed them both.

Anyway, I suppose I digress.  What does all of this have to do with Freedom Force?  Well, I confess that I never really considered bringing the amphibious foursome into the realm of the world’s greatest superhero game until Style and Revenant came out with their hexes and skins respectively.  These excellent creations in hand, I immediately saw just how awesome it would be to kick the Foot all over New York.  However, one thing has stopped me from really taking a crack at making something of the Turtles, and that is the lack of seminal cartoon favorites, Beebop and Rocksteady.  We’ve got Footsoldiers, I think we may even have a Shredder, but I just couldn’t stand to try and make a Turtles adventure without mutants to mangle.  The lack of Krang also gives me pause, but he’d only really be important if I were to try and tell a longer story.

Supposing that I had every TMNT related mesh or skin I could desire, what would I do?  Well, I’d probably hew close to the first episode or two of the ‘toon, because it is a solid adventure that has all the elements I’d need, but if I were going to do more with it, I’d bring in Casey Jones and probably throw in a little trip to Dimension X!  If resources weren’t an issue (a common wish of mine), I think it would also be a lot of fun to see a visit to the Turtles possible future from the Adventures comics.  They visited a world that was flooded by the melting of the ice caps (TMNT comics were environmentally conscious, even back then in the 80’s, and that had a big effect on me).  There they met a villainous, time-traveling shark named Armaggon, and battled it out in a rather ambivalent, almost bittersweet future.  I always thought that was a great setting, and Armaggon was a great villain.  It might also be fun to give the Mutanimals a visit, although I’d probably just use them as recruitable characters in whatever main storyline I was building.  All in all, I’d say the Turtles were definitely worth a visit, and I hope I’ll find time one day to put something together for them.

3 comments on “Further Projects from the Ether”