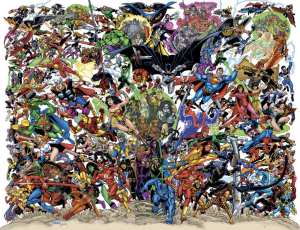 Welcome to Freedom Reborn’s first, but hopefully not last, EZScript competition!  I’ve been a big proponent of M25’s nearly miraculous scripting tool, and have only been able to create mods for Freedom Force thanks to him.  I’ve said many times that EZScript is extremely easy to use, and have shown that you can actually create an adventure in about five minutes, provided you aren’t trying to be too fancy.  When you’re doing more complex stuff, like a massive, five-campaign mod called the DCUG, it tends to become equivalently challenging.  However, with the advent of the EZScript Editor, there is an almost fool-proof way to create adventures for Freedom Force.  I want to call on the FF community, especially those who have never attempted modding before, to take a crack at creating a short mission.

We all have a favorite character, or a favorite group of characters, and as likely as not, your particular favorite hasn’t received quite as much attention as you think they deserve.  Now’s your chance to tell a story all your own.  Anyone who wants to participate should choose their favorite character, or handful of characters, and write a simple one mission script for them.  If you want to tell a story about Thor, then do it!  If you want to see an adventure starring the Blue Beetle, create it!  Any character or setting is fair game, and most already likely have some assets available for them.  Take advantage of the vast amounts of content available for this game, because we are lucky enough to still be playing it when even some of the most obscure characters have been skinned, meshed, or skoped.  You don’t need to create a whole mod, just a simple rumble room mission, although you are welcome to do more if you feel so inclined.  I also encourage you to simply use maps that are already EZScript enabled, but if you want to create or modify a map, then feel free to do that as well.

If this is a contest, there has to be a winner, right?  I’m afraid you’re stuck with me as a judge, but the winner will receive a page here on my blog to showcase their mission, and any others they want to make.  If any of the more talented members of our community want to contribute something else in way of a prize, I’d be quite alright with that.

If you’re interested in trying your hand at this contest, then sign up here or at FR, listing your character and, if applicable, your setting/era.  I’m going to allow a week for sign-ups, and a week for production (although you only really need an afternoon for something relatively easy).  All submissions must be in by Sunday the 31st of January.  Submissions should include an EZScript mission file, a map (if you’re using a custom one), and herofiles/meshes/skins for necessary characters.  I encourage you to pack everything up and upload it to Mediafire or a similar service.

So, whether you are a skinner, mesher, skoper, modder, or even a lurker, I challenge you to tell your own story, and tell it well!