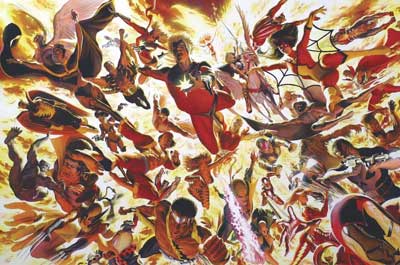 Howdy folks!  I’ve been hard at work since my return from distant shores, and here are the first fruits of those efforts.  I’m releasing a new update for my Marvel Adventures mod that fixes a ton of problems and provides a lot of tweaks and improvements.  I’m also including something that has been requested from time to time, and which I’ll try to make a standard from here on out, save game files for each mission for each campaign, so if you do run into problems or just want to skip around, you can keep playing as you like.  So, without further ado, you can get the new version of the mod here:

(I’m having trouble getting the file uploaded to my server at the moment, so you’ll have to get it from my ModDB page until I fix the issue)

FIRST DELETE ANY PREVIOUS VERSIONS OF THE MOD!

Then, simply run the installer and point it to the proper directory, where FFvTTR is installed.  The default data path points to the Steam installation of the game, so you’ll need to change it if you have it installed in a different location.  This is the default directory:

Note the “MA” at the end.  That is the mod folder.  Don’t forget to add that if you change the directory!  Do NOT install the mod directly into your FF directory, as it won’t work and it will likely mess up your game installation.

This is not your average mod. It has a total of 10 campaigns, 7 full length and 3 mini-campaigns (which might get expanded in the future)! Playing them used to be a bit complicated, but thanks to Abenavides, it’s now just a matter of clicking on the appropriately named .exe included in the mod folder. Each of these launches the game with the appropriate campaign loaded. The rest of the game is the same, so you can play in the RR with the full cast of characters with any and all of the game modes. This just changes the campaign missions available to you.

If for some reasons the .exes don’t work for you, you can still access all of the campaigns manually.

Simply choose the campaign you want out of the ‘Campaigns’ folder, copy it, rename the copy to campdef, and drop it in your main MA folder, rewriting the exiting one. Don’t forget to copy these, or you’ll lose campaigns!