Howdy folks!  Time for another dev journal!  This one covers a range of topics but focuses on the addition of new characters to the mod’s massive roster.

First off, I am proud to announce that I’m no longer the only storyteller that will be featured in the DCUG!  Since the very, very beginning, one of my great hopes for this project was that it would serve as a springboard for others to tell their own stories in my version of the DCU.  I envisioned it as a massive sandbox that other DC fans could play in and help me flesh out.  Several folks started various projects to contribute, but they all eventually fell through for one reason or another, most because people just got busy with real life.  I actually still have a partially completed campaign called “Monkey Business” written up that a great guy named lmalonsof and I were working on back in the day, featuring a team-up of DC ape villains.   It promised to be a blast, and I should probably dig it out and try to finish it up one of these days.

Anyway, the new (and, really, only other) member of the DCUG team goes by Or Wolvie, a fellow FF modder who started a very promising project a few years ago but put it on hold after running into technical difficulties (I still hope he’ll finish it one of these days!).  I asked him if he’d like to tell some of his own stories in the mod, and to my delight, he agreed.  I gave him his pick of characters and teams, and he dreamed up some really fun adventures for Green Arrow and for the Teen Titans.  He’s well on his way to having his two new campaigns scripted up, and hopefully I’ll have some previews of them to share before too terribly long.  I for one am really looking forward to them!

Now, on to the update!

In preparation for the finale for the JLA/JSA crossover, I’ve been working on adding some new characters to the mod.  My plans for the mission involve a host of villains of the two teams, drawn from all points in time.  I find myself needing some more of the JSA’s villains, as they were relatively poorly represented previously.  This seems like a good opportunity to offer some reflections on my design philosophy and some info on how characters are built. 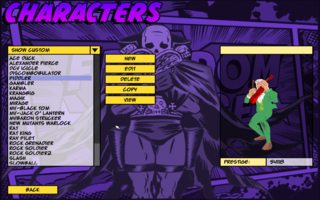 It starts with tracking down or requesting the art assets for a character.  At this point, almost any comic character you can imagine has been created, at least in some fashion, by our wonderful FF community.  So, I created my wishlist of JSA foes, posted on Freedom Reborn, and within an afternoon, the community pointed me to where I could find all of them.  Then it’s just a matter of dropping the meshes, skins, and keyframes into the FFvTTR Custom/Library/Art/Characters directory, where I can check them out with the CharacterTool.  When I have chosen the ones I want, I launch the current DCUG build and use the in-game character creator, which is wonderfully flexible and user friendly, to create a character file, or “Herofile”, which records and interprets their stats (like strength, speed, agility, etc.), powers, attributes (like if they can fly or climb walls), material type, and voice.  I often use existing HF packs as a starting point, but I always customize the characters with my own interpretation. 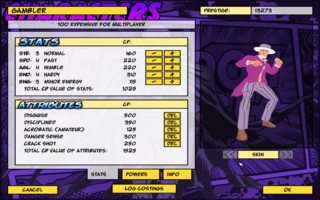 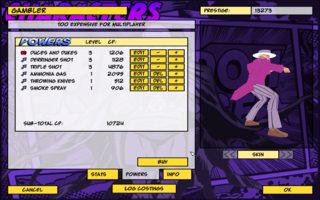 The DCUG was the first mod I ever created, and my character design philosophy has evolved a bit since I made all of its characters.  Now, this means I have to keep an eye on myself so that I don’t screw up the balancing by designing a character the way I did for my more recent mods like Marvel Adventures.  In general, my biggest priority for the early DCUG was comic accuracy and breadth, and I would just provide enough powers and abilities to capture the character, not paying as much attention to playability and fully realizing them as I could have.  I’m in the process of going back and polishing the existing characters to reflect a more comprehensive approach, and I’m building new ones with a more thorough eye as well. 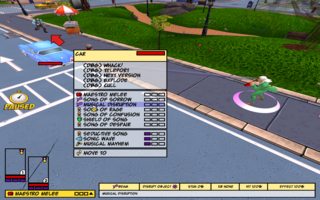 I put more focus on making characters interesting to play and filling each one’s Herofile, giving them a full range of 10 powers whenever possible, as many attributes as made sense, and generally trying to use all available slots.  So, the first new characters I was developing were JSA foes, as I mentioned, and they posed a challenge because I really wasn’t all that familiar with them, having read few of their stories.  Fortunately, the Internet is full of information on ridiculous minutia, like the powers of 3rd stringers like The Fiddler.  My go-to sources are Ben Reily’s excellent Marvel RPG page, which, counter-intuitively, also has info on DC, and the great site Rapsheet, which has info on comic villains.

So, I built the Fiddler, giving him a range of powers to represent his magical violin (yes, that is a real thing in the DC Universe.  Aren’t comics grand?).  I also gave him some neat FFX (Freedom Force community expansion) attributes that allow him to use his music to affect the actual environment of a level.  He can do things like bring inanimate objects to life to fight for him. 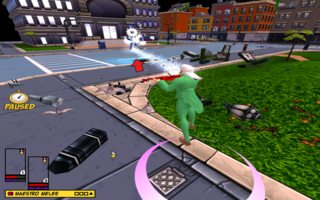 I also built The Gambler, who is just a normal human with trick guns and knives.  He proved a challenge because of his limited powers.  While FF is perfect for depicting super-beings, it can get a little tough when you’re making normal humans with any variety or interest.  Fortunately, The Gambler has enough gimmicks to keep him interesting, and I came up with a fun HF. 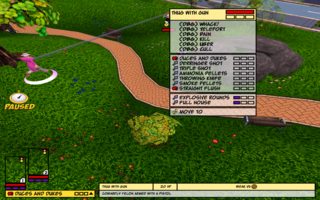 I also started working on the old war comic classic, the Haunted Tank!  That’s right; after previewing the art for this formidable fighting machine in the last journal, its now actually playable, though I’ll probably keep tweaking it. 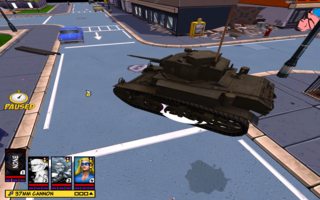 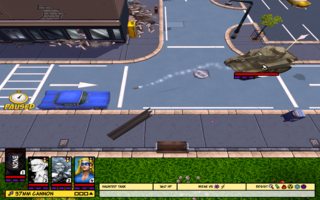 As I went, my list of new characters to add continued to grow on me, as it always does, and I cast my net wider. I designed and added a number of JSA villains, but I also ended up adding some Firestorm foes and some members of the Suicide Squad that I had previously missed, taking advantage of some really lovely new skins/skopes by FR member Laughing Paradox. 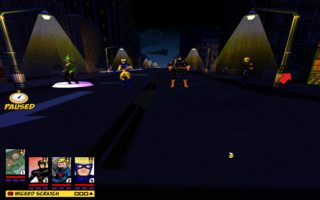 In this batch of characters I ended up adding:

After I had finished my designing and testing, it was time to add the characters into the mod itself. There are a number of ways to do this. My favorite has always been a special Rumble Room (the game’s sandbox mode) gametype that adds included characters to the games .dats, or data files. However, in my current Windows 10 build, that gametype doesn’t work quite right, being super, ridiculously slow, so I went with my second favorite, which is Alex’s fantastic Herotool. It has a ‘send to dat’ feature that is very strong and at this point may well be better than using the in-game method.

Now, you might think that’s the end of the process, but it is really just the beginning. Now comes the hard work. First, I went through and wrote all the strings entries, which provide the ‘cleaned-up’ names of characters and powers, biographies, and mouse-over descriptions. This is a little detail I’ve always been very intentional about including in my mods, and it is rather painstaking work, going line-by line, thinking up (hopefully) clever descriptions and names for powers and taglinles. Honestly, it’s one of my least favorite parts of the process. 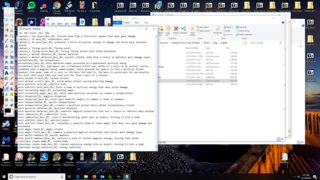 With that done, it’s time for customizations. FFX has given mod makers and players an incredible set of tools to customize their FF experience. It lets you do all kinds of things that the base game doesn’t. For example, The Enchantress can transform regular items in her environment in interesting ways, like transmutating a street light into a poisonous gas cloud, while Abra Kadabra can trap his enemies in a crystaline cage with its own hitpoints. Some of these FFX additions will work ‘out of the box’ but a lot of them require at least an extra step of customization or setup, especially some of the coolest ones. I’ve given several of these charaters FF1 style active defenses, meaning they’ve got forcefields that have a limited hitpoint pool and can actually be battered down, but that took a few extra steps and some editing of files. 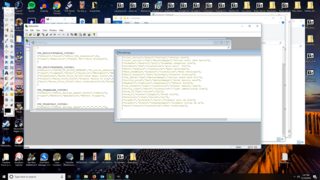 Once all of that is done, then I go through and choose voicepacks appropriate for the characters, drawing on the massive library I’ve acquired over the years, which was hugely expanded by VPMAX, the community voice pack…pack. Those final touches done, it’s time to re-brand all of the new characters with the FFX Control Center, which helps the game identify and understand them, and then it is time to test them out! 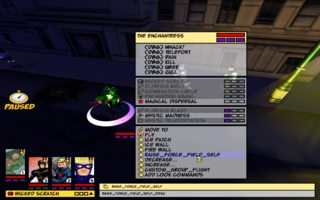 In this case, things went relatively smoothly, and I was on to other matters.

As is always the case, I was working on several things at a time, just as I remembered something or as a thought grabbed me. In my various modding meanderings, I also happened to solve a mystery that was partially responsible for me abandoning my Aquaman campaign way back when! I had a lot of big plans for that storyline, and they involved trying things I had never tried before, like adding new objects and maps into the mod. I had a mission planned that would use a huge freighter as a battle scene, and I even managed to track down a mesh for a freighter that I could use. I tried everything I could think of to get that mesh to show up properly in the game, but I never got it to work. However, my recent exprience with the map issues for my JLA campaign showed me the answer. Instead of trying to add the boat as an object, I just added it directly to the map. That still took some doing, but I eventually figured it out, and I now have a way to tell stories I’ve been wanting to tell for years and years! 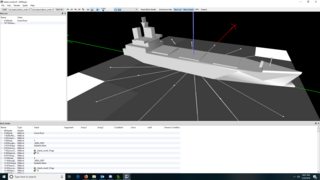 And that is all the news from the DCUG at the moment! The roster grows, and things proceed apace. Please check back again soon and see what else is in store. Look for some information about Or_Wolvie’s new campaigns soon!