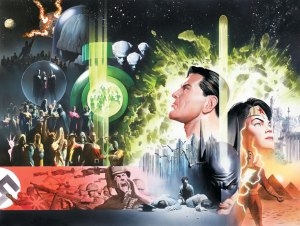 The DC Universe According to Grey is, as the title suggests, my love letter to and personal take on the DC Comics Universe. It’s got a Bronze Age flavor with modern narrative sensibilities, and it is packed with four color heroes.  It is a massive, sprawling mod, including hundreds of characters, all painstakingly crafted, customized, and balanced, created in as fine a detail and with as much faithfulness and completeness as I could manage, all playable in the sandbox mode of the greatest superhero game of all time, Freedom Force vs. The Third Reich. The mod also includes dozens of maps and dozens of playable missions across several different campaigns.

You can see the mod in action in these old, and exceedingly poor videos I made a while back:

It all began with a desire to have my own little playground, to get my favorite superheroes and their world ‘right’, as I saw it.  I love the characters and the world that DC Comics created, and for my money, it doesn’t get any better than the wonderful, archetypal glory of Superman, Batman, Wonder Woman, the Justice League, and the rest.  I grew up reading Batman off the spinner rack, watching re-runs of Super Friends, catching Batman: The Animated Series after school, and rediscovering the joys and wonders of the DCU in college with Justice League: The Animated Series.

I have a deep and abiding affection for DC Comics and their characters, but when I started modding so many years ago, I wasn’t finding much in those current comic incarnations that I recognized or enjoyed.  My heroes were angry, angsty, broken, and pretty thoroughly unheroic.  Their world was dirty, dark, and lacking the joy and hope that, seem, to me, part of the inherent, archetypal appeal of comics.  The excellent, colorful, heroic, yet thoughtful portrayals in the Timmverse shows, mixing the classic characters with modern storytelling sensibilities and an incredible quality of craftsmanship, was the exception rather than the rule, and I decided, since I couldn’t find what I wanted in comics, I would create it for myself in Freedom Force.

My goal was to create a massive, single-authored version of the DC Universe, approaching the whole world with a single plan and a consistent ethos and re-writing DC history as I saw fit.  So, I started with my favorite era of DC Comics, the Bronze Age.  For my money, the Bronze Age is the best, purest, most heroic, and most joyful incarnation of those characters and settings, despite having plenty of flaws.  It also gave us a more mature, in the true sense, approach to superheroics, with greater depth and sophistication than the Silver Age.  Still, the Bronze Age DCU does have plenty of flaws.  My goal was to smooth out the rough edges, keeping the fun, joyful heroism of the era, yet mixing it with the more coherent, rational sensibilities of post-Crisis innovations and the maturation of the genre.  No Emerald Twilight for Hal, no musical coffins for deceased characters, no rotating cast of Robins, nor ten different origins for Hawkman, just one long, single-authored storyline.

In a perfect world, I would love a crack at actually writing, or at least editing, a whole DC Universe of stories, but short of the powers that be at DC drawing my name out of the phonebook and handing me the reins to the company, this is the next best thing.  So, I spent several years putting together the DC Universe in Freedom Force: skins, meshes, herofiles,  my own voicepacks, and a whole host of campaigns that utilize more DC characters than you can shake a cosmic rod at.

So, what is my version of the DCU?  Chances are, it will look pretty similar to a DC you know, unless you know the movies (In that case, I’m so sorry for you!).

Essentially, I tried to take the ‘best of all worlds’ approach that the Timmverse shows employed, and, in fact, often based my versions of characters or concepts off of their takes on them.  I sought to create classic, iconic versions of the characters, striving to take the best elements from all of their interpretations and create my own definitive (if only to me) take on the entire DC Universe.  Nonetheless, the mod’s vast cast of characters and their interpretations are predominantly from the Bronze Age, with some notable exceptions by way of particularly great characters or concepts.  For example, anyone going from the businessman version of Lex Luthor back to the simple mad scientist version is, to my mind, moving backwards in more ways than one.

The continuity is largely of Bronze vintage too, though with much of the streamlining of the latter, Post-Crisis stories. For example, While Hawkman is space cop Katar Hol, without all the worry about reincarnations and tangled histories, the Justice Society existed in the same universe as the Justice League, albeit earlier in history. The JSA thus had no Superman or Batman. Yet, the Big 7 still found the Justice League.

My version of the universe is heavily influenced by the ‘Timmverse” of DC cartoons, like Batman: TAS, Superman:TAS, and JLU created by Bruce Timm and co.  In fact, all of B:TAS (except the subpar ’new’ episodes of the final season) and S:TAS can be considered as ‘canon’ for the mod. My Batman campaign actually draws on the events on an episode from the classic Batman show as the inciting incident for its plot.  Superman: TAS can also be considered DCUG ‘canon,’ for the most part.  JLU, though providing a lot of the inspiration for my Justice League stories, is too different in its approach to the League’s composition to be direct canon, but it is definitely an inspiration and I see it as marking, in broad strokes, a story very similar to that which I am telling with the team.

There was some unpleasantness involving a division in the FF community about this project when I first released this mod.  I was pretty discouraged about the whole thing and lost heart, releasing the project rather unfinished.  Some characters were only partially implemented, and many of my campaign plans remained incomplete as well.  However, I have finally returned to my first and greatest project.

The mod is currently under construction, as I prepare a complete revamp, update, and expansion of the project.  I have grand plans for a number of new campaigns and expansions and improvements of the existing ones.  I won’t give everything away here, but you can follow developer journals on Freedomreborn or here, if you’re interested.

The downloads are no longer availabe.  If you’re interested in this project, please follow my site or watch FR, and, eventually, a new version will be released.

63 comments on “The DC Universe According to Grey”